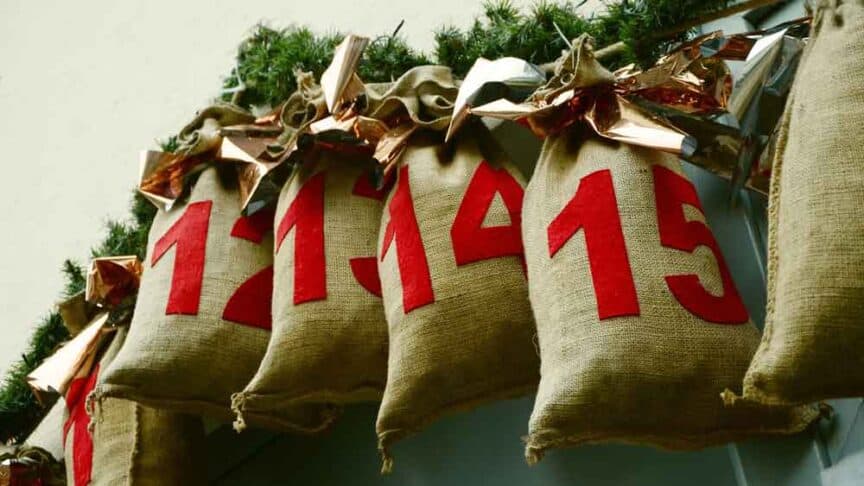 The advent Calendar is a Christmas tradition that is very European, in fact, the origin of the Advent calendar has its roots in Germany at the beginning of the 20th century. This was a time when many of the customs we associate with the celebration of Christmas was invented. Today, more than 100 years later, the Advent calendar is still very popular. Lots of people around the world, from Christians to non-Christians still go out and purchases an Advent calendar, for either themselves or their children to count down the days until Christmas.

One of the first examples of something that could be called an Advent calendar comes from a children’s book that was published in 1851 by Elise Averdieck in Germany. ”Every evening when the little girl Elisabeth goes to bed, her mother tells her a little bit about the origin of Christmas. Afterward, they sing a lot of Christmas carols together and hang a new picture about Christmas on the wallpaper, they do this until all of the 24 pictures hangs on the wall, and then the children know that Christmas is here”

An advent calendar helped the children by counting down the days until Christmas Eve which is on the 24th of December at sundown. Before the advent calendars were invented families would use chalk marks on the doors and wipe one away every day to count down the days.

When was the Advent calendar invented?

The first and oldest printed Advent calendar was published in 1902, and it is actually not even a calendar, but it was a clock. With 12 numbers on it, and a pointer that you could move to countdown the 12 days of Christmas. However, this is a debated topic, and the opinions about if this should be called an advent calendar are split down the middle.

Nevertheless, it is a German named, Gerhard lang (1881-1974) who has officially been credited for being the inventor of the first printed Advent calendar, and it all started when he was a little boy.

When Gerhard was a little boy, his mother gave him 24 cookies that were sewn onto the lid and put onto a piece of carton. He was allowed to eat one cookie every day and thereby counting the days until Christmas Eve.

In 1903 when Gerhard was in his early 20s, he remembered this homemade Advent calendar by his mother, and it probably inspired him to make the first printed Advent calendar. The calendar was mass-produced by the company called Reichhold & Lang, lithographic institute (in German: Lithographische Kunstanstalt) G.m.b.H, and it was called ”in the land of the Christ Child” (in German: Im Lande des Christkinds). The date when it was published used to be 1908, but it was later pushed back to 1903.

The calendar had 24 short verses about Christmas and 24 colorful images that were drawn by the artist Richard Ernst Kepler. Every day from the 1st of December to the 24th a child would carefully cut out one of the images, glue it on top of the calendar, and thereby hide the short verses one by one. The verses were printed on each side of the calendar, so you could still read them on the back.

The first Advent Calendars with doors

Around the year 1920, the same German company ”Reichhold & Lang” in Munich (German: München) came up with the idea to make Christmas calendars with small doors on them. The calendar was designed by the artist Dora Baum (1881-1949) and was given the name Christkindleins Haus (English: The house of the Christ child).

This Christmas calendar had only 19 double doors on it, starting from the 6th of December until the 24th of December, which means this calendar belongs among the Nikolaus calendars.

During the 1st world war in Europe (1914-1918) the production of these calendars had pretty much stopped, and it was not until now, that the demand for them was beginning to rise again along with the German economy.

Around the year 1926, the first Advent calendar with chocolate came to the market in Germany. It was again the innovative company Reichhold & Lang who had come up with the idea to purchase 20 different pieces of chocolate from the company Stollwerck, and put them into their Advent calendar for Christmas called ”The Christmas Rose”.

At the beginning of the 1930s, the first Advent calendars for blind children began to be produced in Germany, and the first version was a remake of the calendar in the Land of the Christ Child from 1903.

During the 1930s the demand for the Advent calendars increased rapidly throughout Germany along with their economic boom, which has often been described as Germany’s economic miracle. As Germany was the first country in the west started to recover from the great depression.

However, due to the 2nd world war (1939-1945), the National Socialist German Workers’ Party (NSDAP) put a ban on the production of illustrated calendars, except for the publisher Franz Eher Verlag which was controlled by the party. The name was also changed from the Advent calendar to the Pre-Christmas calendar, and the traditional Christian images were replaced with symbolism and ideological content from the party.

After the war, the calendars regained their previous name, and the knowledge of the advent calendars began to spread to more countries around the world.

The two Yule calendars had almost the same name, just without the hyphen, Børnenes Jule-Kalender, and Børnenes Julekalender (Children’s Yule Calendar). However, they were not identical, the first one was a tear-off block calendar with colored drawings and three short verses.

The text was written by the Danish author Aage Germann, and the pretty illustrations were drawn by Hedvis Colling. These two people were very well known in Denmark at the time, for their children’s literature in the 1920s.

The second Yule calendar is what we today would call a traditional Advent calendar with 24 numbers, and the calendar is a little unique because the tiny boxes are all in different shapes and sizes, and the images behind the numbers are based on the Danish ”Jul”, and not images from southern Germany, which was often seen on most Advent calendars outside of Germany (Christmas means Jul in Danish). The Advent calendar was drawn by the Danish illustrator, Ejnar Vindfeldt (1905-1953).

It was not everyone that could afford to purchase a Christmas calendar, and that lead to some people using their creativity to make one themselves. This Christmas calendar was handmade in Denmark in 1932, as a gift for a family member, and the text says Merry Christmas (in Danish: Glædelig Jul). The stars and the roof of the church are made from glossy paper, and inside the tiny little boxes, there are small images cut out from scrap pictures (In Danish: Glansbilleder), (In German: Glanzbilder).

After the second world war, Advent calendars with small gift-wrapped presents (in Danish: Pakkekalender), slowly began to become the norm in Denmark. An Advent calendar with presents would typically have 24 small gifts, and one big gift on the 24th of December. The presents could contain small packs of Legos or candy for the children.

Some adults also make an Advent calendar for their partner, for a male, this could, for instance, be 24 different beers. If you don’t want your partner to be drunk all December, then you could just give him beers on Sundays, and now that we are talking about Sundays. Some families only give Advent gifts, so instead of many small gifts, they get 4 big presents, one each Sunday on Advent.

In 1994 the Danish state-owned gambling company called ”Dansk Tips Tjeneste” began to sell Yule scratch cards (in Danish: Skrabe-Julekalender), where the grand prize was 1 million kroner. One lucky person could have an extra merry Christmas, and be able to buy bigger presents for their loved ones, or just take a long holiday from all the hassle.

Today, we can find these Advent calendars all over the web, and companies in all genres from insurance to candy webshops use them to attract new customers.

We all know that December is full of unhealthy treats, but the Children should not miss out. Christmas is, after all, a magical time for children. However, one way to cut back on treats is the Advent calendar, instead of buying them with candy, choose one with toys. I’ve listed a few examples of these Advent calendars below, and boxes that many of my friends have purchased for their children, and they loved them.

Lego is always a popular Advent calendar among children, and this year they have four different Lego Advent calendars to choose from, Star Wars, Friends, City, and Harry Potter. You can check out more details about these Advent calendars by following clicking on one of the images below.