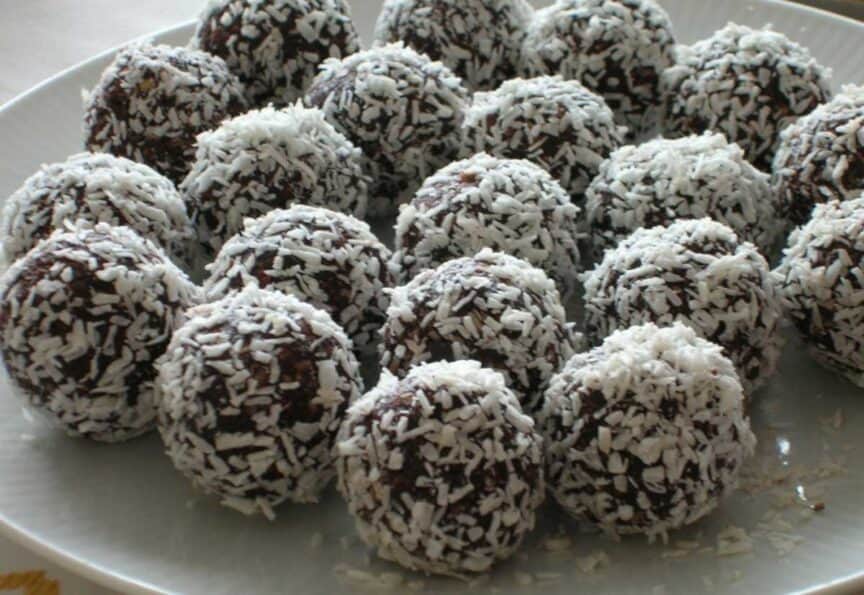 Havregrynskugler are Danish oatmeal balls that were invited in 1943 when the German forces occupied Denmark. Because of the occupation, some of the products were scarce, and the Danes were using ration stamps to purchase certain products, such as sugar and butter.

Havregrynskugler is also a traditional pastry in Sweden, but they a have a diffrient name for these delicious oatmeal balls, which is chokladbollar (chocolate balls).

The oatmeal balls is a very popular pastry especially among the children in Scandinavia, and they are so easy to make that even and child can do it, and many of us Danes have made them in our childhood. We do not just make them during December in Denmark, although that is when they are most common on the kitchen tables, they can be enjoyed all year round.

While the original oatmeal balls recipe was published in a small booklet on page 62 for housewives called Ingenuity in a time of crisis (Danish: Opfindsomhed i en krisetid) during the second world war, it has both been improved and the measurements have been adjusted since then, and the version below is a present-day version. The original cocoa oatmeal balls recipe was as follows: 125g oatmeal, 100g butter, 100g powdered sugar, 25g cocoa, rum essence or almond essence, and coffee.

How to make Cocoa oatmeal balls

Serve the havregrynskugler with a glass of milk, or a cup of tea or coffee. They taste best the same day that they are made.