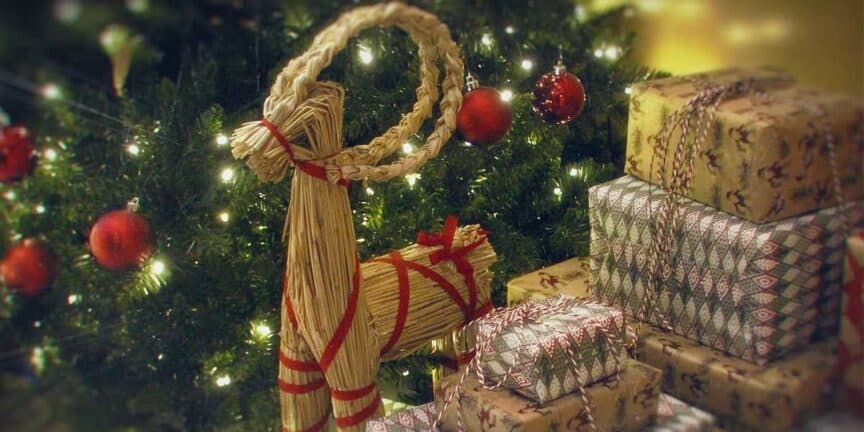 The origin of the Yule Goat

The origin of the Yule goat is uncertain, but it does seem that it has roots in paganism. We know for certain that it has been a widespread tradition throughout large parts of Scandinavia for many decades, especially in Sweden and Denmark.

The Yule goat tradition has most likely started in Scandinavia and then moved further south to other parts of Northern Europe, such as Poland. It is common that traditions like this spread to other societies with trade and population movement.

The reason why I think this might be the case is that the Yule goat tradition seems to have roots in the old Viking countries, Denmark, Norway, and Sweden. The historical evidence, indicates, that the Yule goat is a Norse paganism symbol, that most likely has a connection that stretches back thousands of years, and to then paganism was the most common faith in northern Europe.

The god who is associated with the goat is the god Thor who is the god of thunder, and one of the most powerful gods in the ancient religion known under many names, but in the most common tongue called Asatru (Old Norse: Ásatrú).

One of the Nordic sagas that particular mentions Thor’s goats are in the saga of Thor’s and Loki’s Journey to the land of the giants. On their journey, they make a stop at the house of a farmer and his family to spend the night. The farmer was so poor, that he could not offer them any food, so Thor decided to kill his two goats, chop up their meat, and put it into a cooking pot. The next morning Thor used his hammer Mjolnir to bring his two goats back to life.

The goat is a symbol of Thor, and it is possible that this little saga is the origin of the Yule goat tradition. It could have been the beginning of sacrificing a goat and using its fur and skull to dress up as a goat. Thor is also known to have a bad temper, and combining Thor’s temper and insults while dressing up as a goat, could have been a fun activity during Yule.

We know from records dating back to the 17th century, that the Yule goat was one of the most festive happenings that could happen during Yuletide. It was at a time when most of the population lived in small villages and worked as farmers.

One of the local farm servants called a gårdskarl in Danish, would put on a white sheet and buckle a goat skull onto his head. Before he would burst into peoples living rooms while knocking over their furniture, and shouting insults and obscene language, while telling lies, and sometimes inconvenient truths that all more or less know about at the Yule party.

The better the Yule goat is, the more he is rewarded with beer and treats at the party, when he has gotten his fair share of the beer and is done insulting the guests, he will stumble back out of the door, onto the cold and snowy streets.

This Yule tradition has slowly through the years changed into a more quiet and innocent tradition in the form of a Yule goat made from hay, held together with a bunch of red ribbons. The goats are mostly used as a Yule decoration around the house, but they are also sometimes used at the entrance to people’s houses to greet their guests during the Yule season.

It is not in all parts of Scandinavia was the Yule goat is treated just as a decoration. Some pagans write small messages with personal wishes on them for the coming year and place them around the neck of the goat before the Yule goat is sacrificed on the bonfire. Just like the Yule goat, fire is also an important element during this season.

A tradition that is related to the Yule goat is the tradition called Julebukking, where people from the neighborhood put on a goat mask and walkings around the town singing pagan songs in the week leading up to New Year’s Eve. However, in contrary to the Christmas carols, these songs are probably more sinister and filled with insults for the listeners.

Goats are often used in European paganism, and in the ancient Proto-Slavic beliefs they also have a celebration like Yule, but they call it Koliada. This is a festival that honors the god of the fertile sun and the harvest. This god is named Devac (also known as Dazbog), and this god is represented by a white goat.

In the central European countries around southern Germany and Austria, they have a creature known as Krampus, which also has a pre-Christian origin.

Krampus is a half-goat, half-demon like creature that walks through the cities with torches during the night looking for houses with children inside. When he smells the presence of a child, he will walk up to the house and look through the window, while scratching his long and dark fingernails on the window. As soon as Krampus spots a child inside the house, he will burst through the door.

Once inside he will either punish the children if they have misbehaved by whipping them or stuff them into his bag and take them with him home, where he will eat them. However, if the children have been well-behaved during the year, he will reward them with gifts.